Estense Castle
In Ferrara in 1385, a dangerous revolt convinced Niccolò II d’Este of the need to erect mighty defences for himself and his family; thus the Castello di San Michele was built, a fortress erected against the people. Its imposing proportions, its moat, its drawbridges and its towers date back to that remote period. An elevated covered passageway, which still exists, joined the military building to the marquises’ Palace, today Palazzo Municipale. Centuries went by and the risk of riots died down. And so the castle became the magnificent residence of the court and was embellished with roof terraces at the top of the towers, marble balconies, theRenaissance style courtyard (at the time fully frescoed) and sumptuous apartments. The imposing towers stand out at the four corners of the Castle, symbols of the magnificence of the Este Family: the Torre di Santa Caterina; the splendid Torre dei Leoni, from which it is possible to admire the panorama of Ferrara (you can climb to the top of it during the visit of the Castle); theTorre Marchesana; the Torre di San Paolo.

Palazzo dei Diamanti is a palace located on Corso Ercole I d’Este 21 in Ferrara, northernItaly. It is one of the most famous palaces in Italy, as well one of the most influential examples of European Renaissance architecture designed by Biagio Rossetti upon commission by Sigismondo d’Este, brother of Duke Ercole I, in 1492, it was built between 1493 and 1503. Used as a residential home by the Este and then, starting in 1641, by the Villa marquees, in 1832 the palace was acquired by the municipal in order to house the National Gallery of Art and the Civic UniversityThe most striking feature is the bugnato of the exterior walls: it consists of some 8,500 white (with pink veins) marble blocks carved to represent diamonds, hence its name. The positioning of the diamonds varies in order to maximize the light reflected off the building, creating quite the visual effect. The palace is also well known for its candelabras and the phytomorphic corner motifs. Inside, it has a typical Renaissance courtyard with a cloister and a marble well; the latter is a particular characteristic typical of gardens in Ferrara. 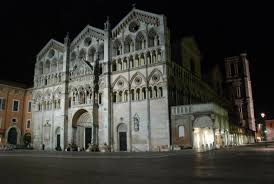 The cathedral of Ferrara dates from the 12th century and bears witness to all the historical periods of the city. The outstanding façade, divided into three sections, was begun in Romanesque style, still visible in the lower part. Note the St. George and the scenes from the New Testament above the central door, the work of the sculptor Nicholaus (1135). The upper part was built some decades later in a Gothic style and besides the numerous small arches and the splayed mullioned windows presents an extraordinary Last Judgment by an unknown sculptor over the central loggia. The side facing Piazza Trento e Trieste is decorated with two galleries and small columns of various shapes. At ground level is the Loggia of the Merchants, occupied by shops since Medieval times. Half way along the south side what remains of the Porta dei Mesi, demolished in the 18th century can still be seen; some of its sculptures are conserved in the Cathedral Museum. The imposingRenaissance campanile, in pink and white marble, is an unfinished work attributed to Leon Battista Alberti. The brickwork apse, whose sober design is lightly embellished by terracotta arches and marble capitals, is the work of Ferrara’s top architect and town planner,Biagio Rossetti.

The ancient Walls of Ferrara encircle the historic centrealmost without interruption for nine kilometres,constituting one of the oldest and most impressive defensive systems of the Middle Ages and theRenaissance and make use of all the techniques of defence used in the 1400s and 1500s: city gates,bastions, large towers, gun slots and embrasures. Time has transformed these walls into a place for meeting friends, practicing sport and recreation, where people can relax as if in a tranquil garden.
Most of the walls to the north were built between 1493 and 1505 and are marked out by the smaller semicircular towers and by the long “patrol path” used by the sentries. At the north-west end of the walls stands the Torrione del Barco, an example of military architecture between the 1400s and 1500s. Distinguishing features include the Porta degli Angeli to the north and, to the east, the Torrione di S. Giovanni, whose circular structure is typical of Renaissance military architecture. The stretch of walls to the east was conceived by Alfonso I d’Este, between 1512 and 1518. Distinguishing features include the artificial hill of the Baluardo della Montagna, where at the end of Via Marco Polo a 17th-century garret for guarding the former Porta di San Giorgio can still be seen. The southern fortifications are characterised by four imposing bastions in the form of the “ace of spades” built on the orders of Alfonso II between 1575 and 1585. At the southern entrance of the walls stands Porta Paola (1612). In the stretch of wall that leads from the gate to the west, there are two bastions and a statue of Pope Paul V who commissioned the 17th-century defensive works.